"Flat Carlita" and Kris DO Peru!

This is more or less a blog entry from Kris Cardall. She and her family went to Peru and brought "flat Carlita" taking pictures of her at several landmarks. Ironically, one of the things I always wanted to do was see the steps of Machu Picchu, but by the time I was thinking of Bucket Lists I couldn't climb stairs. Lucky for me Kris took "flat Carlita" on the adventure that "perfectly proportioned Carla" could never make. Here it is with Kris' commentary below: 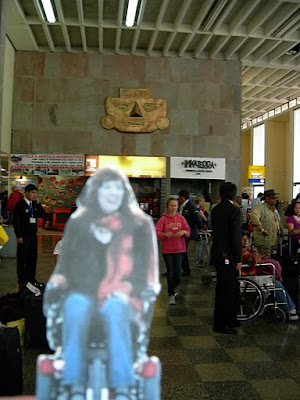 In the Cusco airport. No handicapped bathrooms (or toilet paper) here! 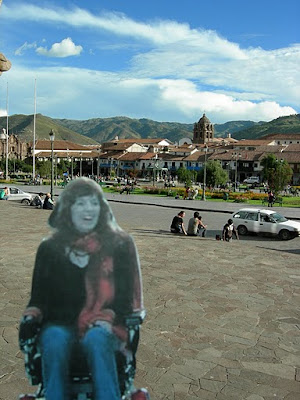 Chillin' in the Cusco plaza. 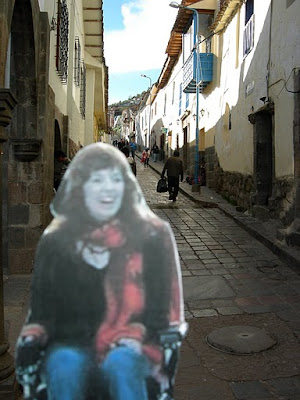 Looking to score some weed on the streets of Cusco. 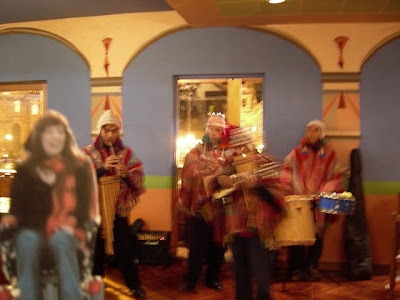 Rockin' out with the band. 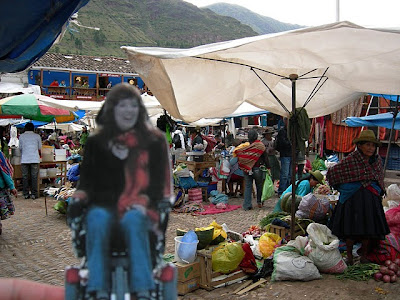 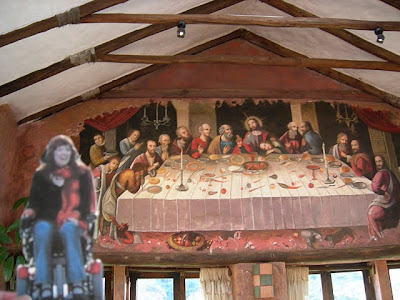 She may not be able to enjoy the food and wine, but she can still hang out with the apostles. 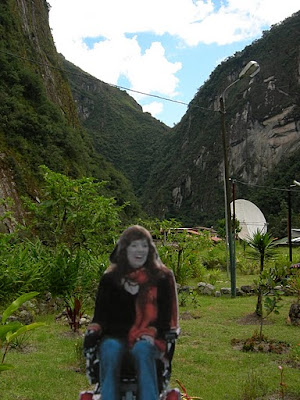 Just off the train in Agua Caliente. 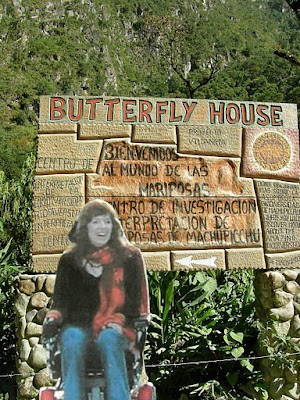 In the Sacred Valley. Butterfly Power!! 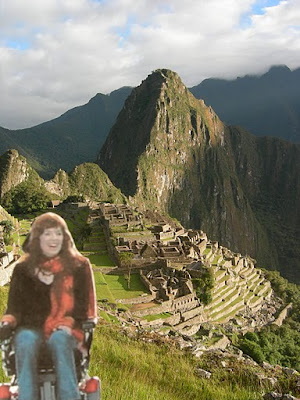 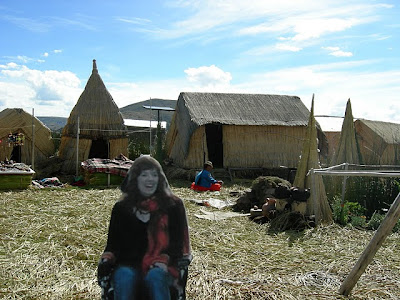 It's a little hard to wheel around on the floating reed island, but she makes it work. 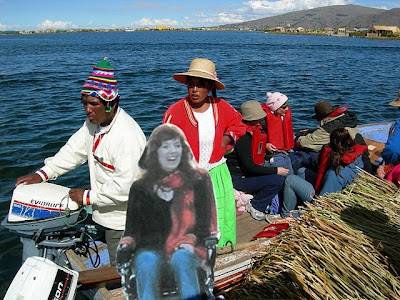 Out for a spin in the motorboat with some new friends.
Posted by Carla Zilbersmith at 1:03 PM 7 comments:

Hi Muselings, it's your best friend Mac, writing to give you an update on how Carla has been lately, since it has been a while since her last blog. If you are expecting razor-sharp wit, astute analyses of life and current events, or some deep spiritual crap, this is probably the wrong blog post to read. Just kidding, whenever I open my mouth, or keyboard, as the case may be, it is deep, witty, and razor-astute (yeah, I just made up a compound word. Deal with it).
The first, and most important thing you need to know about Carla's current physical state, is that the 'S' key on her keyboard is out of commission. Now, it was one thing when she lost her ability to walk, and another thing when she lost her ability to croon like so many songbirds, but imagine losing your ability to pluralize! I am typing on said keyboard, and it makes me feel like my mirror motor neurons are firing. Anybody who both reads Daniel Goleman and ALS literature will get a minor chuckle out of that sentence.
In seriousness, Carla isn't doing all that well. She is no longer really capable of eating, and has made the decision not to get a feeding tube either (note that even if you were to convince her otherwise, it is too late, so save your well-crafted arguments for your next pinochle dispute). Additionally, she is rarely able to get out of bed, though she was able to do so for her father's surprise birthday party yesterday. For possibly the last time, at my urging, Carla wailed on a piñata like there was no tomorrow. Not that she didn't have evidence that there was a chance of there being no tomorrow.....Perhaps the most amusing part of her frail attempts to hold the bat between her legs while swiveling the chair left and right, besides the fact that she still did a better job than Kathy Sprague, was that her lovely caretaker Mayra, who was holding the string to which the piñata was fastened, has never heard of the "handicap for the handicapped" unspoken rule in athletic endeavors, and moved the piñata up and down like she would for a healthy person. I, of course, dominated the piñata game, but I won't write about it, not because it isn't enthralling, but because I'm sure that you each have a mental image of me swinging a bat at a piñata that I don't want to ruin, because I probably didn't have quite as sosa-esque a performance as your projection of me had.
While there is no way to know with ALS, Carla is certainly in the last stage of her life. She is not in a great deal of pain, due to the 21 drugs she takes (most of them prescribed...), specifically the methadone, which she says is like having a layer of cellophane between her brain and her consciousness. Which is something that she would never say, she points out, were it not for the bevy of drugs she takes. She additionally planned a surprise party that she forgot she planned, and sang frosty the snowman with no remembrance of doing so. Do not despair, however (well, okay, you can despair a bit, but not about this!) as these effects are solely due to twenty-first century pharmaceuticals, and not Amyotrophic Lateral Sclerosis.
The basic bottom line, all Macky charm aside, is that, since she can't eat, how long she lives will be determined by how long she can keep swallowing. She hopes to continue swallowing until at least the summer, but certain medical professionals indicate that such a hope may not necessarily be met. She spends most of her time in bed now, and it is, as you can imagine, a very difficult time for her and those who love her.
Send your thoughts her way, and I'll keep you updated. Just because I'm writing this update, however, does not rule out future blog posts from her. She is working on a blog post currently, but she is doing it by herself, so it takes a long time.
If you're feeling down after reading this, Carla would suggest watching this video to cheer up: http://www.youtube.com/watch?v=ZqR_SwwByMM
Posted by Carla Zilbersmith at 2:49 PM 19 comments:

I myself am not much of a "prayer" but if you are would you please save room in your prayers for my friend Megan Mishork. She is a feisty, wonderful 25 year old with ALS who is now in ICU battling double pneumonia. Trust me pneumonia and ALS are a very dangerous combination so she needs all our good energy. Thank you.
Posted by Carla Zilbersmith at 12:14 PM 3 comments:

A song for Carla from a student, admirer and friend

Hello Faithful Carla Community,
I've been priviledged to submit this video of a song I wrote for Carla.
Here are the lyrics:
I can't see any way out, out of here...out of here
But through, your warm embrace, midnight faces home again
and Flames, they weight the light, that keeps the fight, we pray to meet
Head on, unless we fall away, like petals may on a moonlit night
(break)
And cares they lift me high like a lullaby wrapped in flight
I dreamt I was in a baloon and everyone below waved and glowed
Goodbye - I loved the best I knew, Next time I'll do...better.
Thanks
Hugo
Posted by Carla Zilbersmith at 6:27 PM 4 comments:

Hitler and ALS from Richard Ross on Vimeo.

My friend Richard Ross created this overdone meme and breathed new life into it for ALS research. Thank you, Richard, you are brilliant. Hitler is right. It's fucking April and you still have time to buy calendars at a discount even.

I'll try to post again but I am as good as in Hitler's bunker at the end of the war. The walls are closing in and it won't be long now. For now, enjoy this and I defy you not to laugh until you pee or fart.