Today my Dad turns 70 and this is all I can think to give him – a public tribute to a private guy who ALWAYS puts himself before others. The other day, my son had moist eyes as he talked about his “Papa.” He talked about how sad he was that the kindest and most decent man he knew had lost his Mother as a teen and now soon will lose his daughter and watch his grandson repeat history. ”He deserves better,” said Mac.

My Dad was my hero. I would walk to his bus in the evening for the great joy of being able to hold his hand and tell him about school that day. From him I learned the secret to making your child feel safe you: always and without exception be patient and kind to the best of your ability. Remember that you’re the parent and as such your needs are not supposed to come first – your kids’ needs do. Accept the kid you have and don’t criticize or try to change them into your fantasy child.

I lived with my Dad when my parents split. When it was time for college, my Dad girded his loins and told me I should get a birth control device for the dorm. Months later on a visit when having a quiet moment after being introduced to my new boyfriend, my Dad asked me :”So, are you using that gizmo?” meaning my diaghragm. I adored him at that moment. He was the parent so he met me where I was at, in the best way he knew how. As you can see from the intoxicated picture below, this wasn't always easy. 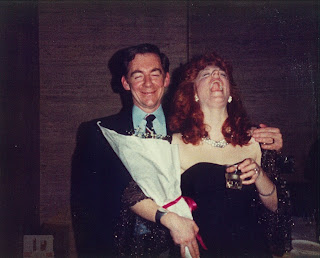 At age 11, I watched in terror as my dad ran towards a stranger’s rolled car which could have burst into flames at any moment and pulled all the passengers to safety. The other Dad in our party went to a nearby house to call for help but not before telling me “Your Dad is crazy, that thing could blow.” We left the accident once the people were safe but they never forgot him and years later tracked him down to say thanks.

Outside the audition room at New England Conservatory where my dad had brought me, I cried as I listened to the other singers who I deemed far better, thus making our trip a waste of time and money. Dad said to me “ You have a problem. All these schools are going to want you and you’re going to have to pick.” I nailed the audition and got into one of the best music schools in the country.

As a toddler, and later as a child, I would pad into my parents’ room at night after a bad dream, a sore tummy or growing pains and my mother would mutter through closed eyes “Talk to your father.” And he would always get up, never complain, rub my cramped legs or stay with me until I fell asleep. Soon I learned to go directly to him. Some nights I would wake up sobbing from nightmares that he had died – the most unthinkable thing in my young life.

There are too many stories - buying the world’s ugliest sofa at a fundraising auction then upon seeing it saying “ hmmm, I must have been drunker than I thought,” shortcuts on hikes that ended up being all day Bataan death marches, post-its on my pillow reading “Goodnight Sweet Princess,” endless hours on the beach turning rocks over, impersonating Donald Sutherland – I could go on but I am typing this with one loving finger.

My Dad was playing basketball with a grandson when a bear ambled by. “What do we do?” asked the boy. “Nothing” said my Dad. “He’s not interested in us.” Then my Dad’s dog Bailey appeared and my Dad ran over and swooped the dog up into his arms and to safety. When he was understandably questioned about his priorities, my Dad said “Well, I have 10 grandchildren, but I only have one dog.”

I only have one Dad – a man of integrity, kindness and humor. A man who is willing to give anything and everything – even mortgage his house if it comes to that – to help me. A man who would gladly trade places with me. A man who loves me more than anyone else ever has.

Happy Birthday Dad. I’m so damned proud to be your daughter. 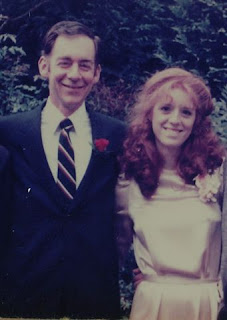 Posted by Carla Zilbersmith at 10:00 AM

This is so beautiful. Such a wonderful tribute. You are all so lucky to have each other. I get excited everytime a new blog entry from you shows up in my Google Reader! Thank you for sharing your stories, even as it becomes more challenging to do so.

"wonderful, wonderful, wonderful !"
Not only are you a beautiful person Carla you are an awesome writer. You couldn't have given uyour Dad a better birthday present...even though it brought tears of joy to his eyes!
Thanks for making his day! Lots of love, Anita

Happy birthday, Mr. Smith -- after all these years (was it 1973 or so when Carla and I became friends?), I still don't think I can call you Jack. Thanks for being so tolerant during all those giggly-girl sleepovers, and for so lovingly raising a truly amazing daughter.

Carla, this is a beautiful tribute and I hear your voice soaring all through it. Thank you. Can't wait to see you. Love, Moira

Happy Birthday Jack Smith...your are an inspiration too...much of the love we have for Carla is a result of your parenting.

BTW, Carla, you typed with ONE FINGER! That must be one meaty muscular finger!

Jack Smith. In the simplicity of that name lives the complexity of love. In the purity of his soul, love grows eternally for his beautiful and unique Carla. How wonderful for the world that he helped to create you and that you recreate the world for the rest of us. Happy Birthday, Jack Smith!

What a wonderful tribute to a man who is not only a loving father, but a giving, kind and loving human being. The planet needs more Jack Smiths!

I think I just got a little glimpse into why you've come to be the incredible person you are Carla. Thank you for sharing this special day with us. Your writing never fails to touch me in profound and unexpected ways.

That was beautiful. I wish he'd been my dad. :)

Muselings far and wide raise a toast to you.

Can you rent Jack out or does he give lessons to other dads? :-)